I’ve always loved side projects. I was trying to think back to the last time that I didn’t have one and I honestly can’t remember. I sold homemade finger skateboards in elementary school. I made websites for friends in middle school. I started blogging in high school. I kept blogging in college and haven’t stopped. Side projects are a nice change of pace and give you a creative testing ground where you are free to fail without any consequence.

I built a bunch of small and mostly crappy things in 2013…a couple of websites and a handful of “SEO Tools.”

Here is how a few of them turned out:

I relaunched my personal blog during the spring. This is the 33rd post I’ve published this year on TrevinShirey.com. 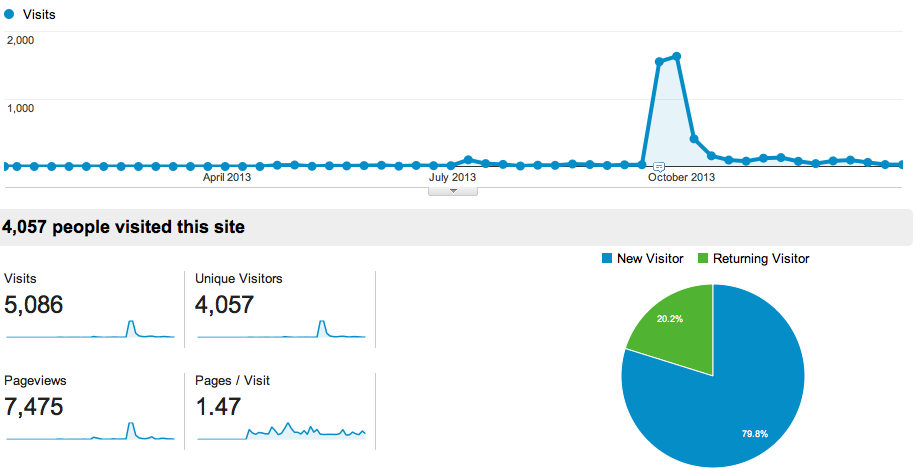 My most popular post this year — by far — was my thoughts on Google’s Hummingbird update (you can see the obvious spike above). I wrote that post the night Hummingbird was announced and it ended up doing pretty well on Twitter. Things kind of snowballed from there onto a few SEO blogs. I think I got around 30 links from it so not too bad.

I had only previously used this domain in college so this is the first year I’ve tried to make something out of it.

I didn’t monetize this site at all so far. I toyed with a hosting ad on the sidebar but it never felt right. I’ll probably keep it ad-free in 2014 and beyond.

I first bought this domain name a couple of years ago. After sitting mostly dormant for a while, I really started posting a lot to the site in late 2012 and most of 2013. As the title makes clear, it’s a recipe blog for simple protein shake recipes. I started coming up with quick 2-3 ingredient protein shake recipes in my tiny apartment and it morphed into this site. Mostly, I was curious how much traffic a recipe blog could earn. I’ve seen a ton of them doing really well both socially and in search engines. 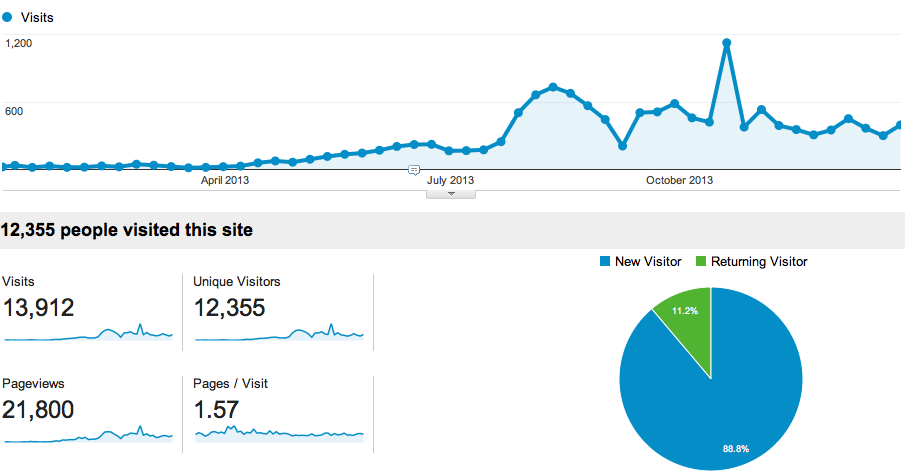 I was actually able to scale traffic nicely for it. I’d add 1-2 posts each week or hire an outside copywriter to do it and traffic kept on growing. Much of the site’s growth has been fueled by Pinterest. I wasn’t a big believer in using Pinterest for marketing until I got rolling on this project and saw thousands of people coming to my site.

With the keyword-rich domain name and around ~200 optimized posts, the site is ranking fairly well in search engines. Growth in search visits has continued nearly every month no matter how often I post new content. I have found that writing recipes is boring so most posts are only around 250 words so I’ve been worried about the content being too thin, but that hasn’t been an issue so far.

I’ve been dissapointed in monetization from the site so far. I’ve tried a number of different tactics in 2013. My original strategy was to plaster Adsense on the site but I didn’t like the low CTR I was getting and it really detracted from the site’s usability. I pivoted a bit to a few different affiliate programs. I pushed Clickbank recipe books and workout programs pretty hard but never made a single dime.

I signed up for Bodybuilding.com’s affiliate program and a few other supplment providers, but didn’t make much from them at all.

The sweet spot so far has been how the site is currently configured. A large Adsense banner + direct Amazon product links in the sidebar. Amazon has been converting around 4.5% of visitors who have clicked through in the past couple of months. While Amazon’s referral rates aren’t high, I’ve found people buy enough random stuff an addition to fitness products to make up for it. With a few other Amazon affiliate sites running products into my account, I can usually sell enough each month to hit the higher tiers of referral rates too.

For 2014, I’m going to continue exploring different monetization tactics, but my biggest venture will be making the site more mobile friendly. Tons of people are looking for recipes either at the gym or on the way home from the gym and the site isn’t designed well for mobile at all (using an old-ish recipe theme).

I decided to finally take the Black Friday plunge this year and participate in what is the Super Bowl of affiliate marketing. I found a nice domain name that I thought would be a great fit and started writing some content on tech deals for Black Friday products. As the end of November kept drawing closer, I started writing less about tech products and more about other niches/verticals that very loosely related to tech. Trying to rank for “black friday camera deals” is rough, as it’s so much more competitive than it was a few years ago. Lots of the big players online are cashing out on Black Friday too. I wasn’t just competiting against other blogs, I saw tons of Huffington Post, The Verge and other popular tech sites churning out some keyword-rich titles like crazy. 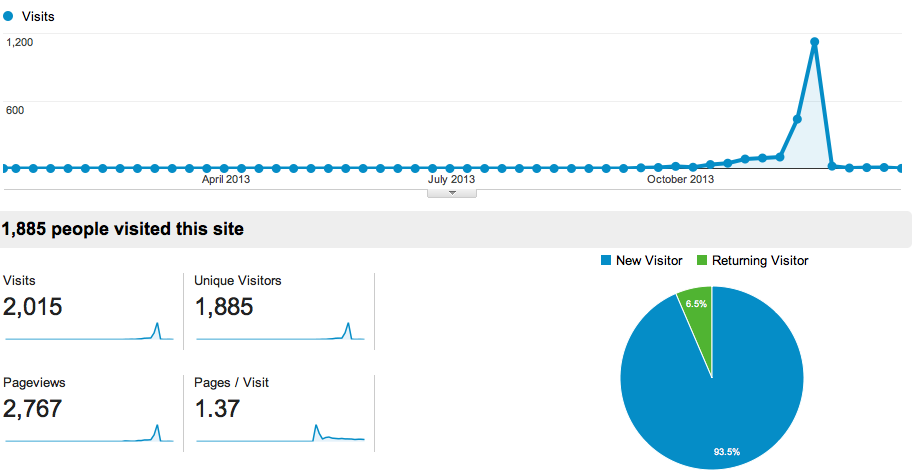 My final strategy was to touch as many verticals as possible that wouldn’t hurt the long term value of the site (I didn’t include a year in the domain name for a reason). I wrote about dog products, car parts, cameras, board games and anything else I thought I could rank for. I was basically throwing a bunch of crap on the wall and praying some of it would stick. Beginning in early November, I was ranking nicely for a bunch of keywords. I was as high as page 2 for “Black Friday predictions,” which was designed to drive some earlier traffic to the site before Black Friday hit.

As competition ramped up, I was only ranking on the top half of page 1 consistently with a handful of pages by the time the big day rolled around. My money pages ended up being about auto parts and the game Cards Against Humanity. Depending on your exact keyword, I was sitting between position 1-4 and was the only one with Google authorship showing up so my CTR was very high.

The auto parts page ended up being my top money maker. If I could do it all over again, I would have focused more on that angle instead of the tech side. It’s easier to rank for and auto parts aren’t cheap. Plus, you can make a nice commission if you work directly with a lot of the online retailers.

Other than SEO, I paid around $20 to get a few of the posts written on the site and I spent another $25 testing out some StumbleUpon ads the week of Thanksgiving.

Nearly all of the money I earned from the site came in through affiliate marketing. I did have some Adsense units running on the site, but the return from them wasn’t huge. I ended up getting referral credit from Amazon for around 70 purchases and was able to make several hundred dollars during the peak shopping season.

For 2014, I’ll continue to do this site and I’ll probably try a couple more targeted Black Friday domains as well. The opportunities aren’t as easy to cash out on as they were a few years ago, but with so much money changing hands it isn’t that difficult to rake in some of it from Amazon or your affiliate of choice. I had fun running the site and watching the traffic come in the week of Thanksgiving was quite the thrill.

Here are some super small tools I built this year:

Find A Cheap Place To Live

The title says it all. I moved to a new apartment this year and spent months trying to find the best bang for my buck. Last time I apartment hunted, I got daily email alerts from Craigslist pulling from a custom feed of all apartment listings within a certain price range and location. I kept that going this year but added another layer to it. I built a terribly coded scraper that pulls in prices of apartments and averages them out. If you’re looking at a few different suburbs, for example, you can easilly compare prices for similar apartments between the two.

It helped me narrow down where I wanted to live. The concept could easily be improved by adding a map overlay or sending email alerts once an area reaches a certain average price level.

I mistakenly overwrote the code and my backup copy didn’t work…so I guess it’s defunct!

A quick Saturday morning project left halfway finished. As I’ve written about before, Google owned properties are starting to take over more real estate in Google’s owned search engine. As Google buys up more companies and integrates them into their machine, more ‘organic’ results are really ads for other Google products. This identifies Google properties and scores the saturation for a particular keyword.

With better design and a nicer overlay, there could be something here but only to poke fun at Google.

When Google announced that all search queries were going to be encrypted, SEOs were left in the dark. Gone was all of the valuable keyword data that had been the foundation for many marketing decisions over the previous decade.

I came up with a remedy involving a terribly intrusive system. It was inspired by a tweet from Jon Henshaw. Instead of having Google spit out keywords, why not go directly to the source? The code prompts all visitors to their site to enter the keyword that the typed in a search engine that drove them to your site. The code is actually fully functional — just needs another layer of functionality to make it useful.

In case it wasn’t already clear, I would not recommend installing this on a site. I thought for a while about registering a domain like notprovidedpopup.com and ‘selling’ this as a groundbreaking tool. I still might do it on a rainy day.

Another tongue-in-cheek tool I made in 2013. If you are familiar with the SEO industry, then you have heard of Mozcon — Moz’s inbound marketing conference held in Seattle each year. The conference itself isn’t terrible — I have several presentations bookmarked — but the endless stream of tweets from attendees are the bane of every-other SEOs existence. Not only do they flood your Twitter feed, but most of the important “nuggets” being tweeted about are worthless garbage.

I made the tweet generator so people can come up with their own groundbreaking tweets and participate in the fun without spending a ridiculous amount of money to actually go to the conference.

My tool ended up being number 1 for a while on Shitbound.org and people had fun with it. I’m hoping to have a new and improved version for whenever this year’s #Mozcon takes place. If anybody has any ideas for it, please email them over.

What SEO Taught Me

This tool generates topics for lazy SEOs. Every SEO has written a post comparing SEO to something far more relatable. This scrapes the latest headlines and spits out a headline idea for your latest and greates “What X Taught Me About Y” linkbait post. I was big into scraping this year.

A few more quick hitters that I also worked on this year. I don’t keep any of them too secret so Google around if you’re really curious:

Overall, I probably spent 100-150 hours working on all of these projects plus a few others I didn’t list. My total hourly earnings wouldn’t amount to a whole lot, but I had a lot of fun building new things online.

My side projects give me a nice testing ground for marketing ideas that I can apply to my 9-5 client work. I was able to pay a month’s rent through making money online. It’s not much, but Ill take it.

Hopefully 2014 ends up even better.