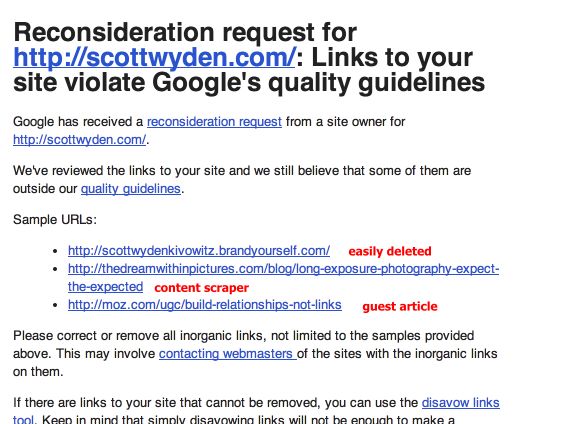 Every now and then, the mighty hand of Google reaches out and jerks the collective chain of SEOs. Google reminds us that they are king. We can run tests, blast links and not do SEO but none of it matters . We have no power over the future of search.

Today’s reminder came courtesy of inbound marketing company Moz. Google has listed one of their community blog posts as an example of an unnatural link in a recent Google Webmaster Tools message.

You can debate whether or not the link is a violation of Google’s Guidelines but that’s a pointless endeavor.

This is hilariously and intentionally broad. If you know anything about search algorithms, it’s impossible to link to another website without understanding that a link may influence that site’s ranking on Google.

As I have said many times, there is no way to easily determine if a link is good or bad. It’s all relative. Put 100 SEOs in a room and show them that link and you’ll get 100 different opinions.

The more interesting thing about Rand’s post, to me, is that this is another great example of how Google has lost control of the link graph.

Before Google was big enough to use cash to influence Washington, they grew a search company based on the principle of the link graph. The link graph was a wonderful way to determine trust and authority on any topic. PageRank was their biggest asset and what made them great.

Now? Google is doing some cool stuff with hardware and software but the link graph that powers the algorithm is a disaster.

Maybe it isn’t a big deal now that Google controls so much of the web’s traffic (which means they control much of the world’s commerce), but Google’s biggest strength is now one of their biggest weaknesses. The algorithm does not work well and even if Google tweaked it, they have ran the natural link graph into the ground by over-policing links the past few years.

But getting too caught up in if this particular link was good or bad shifts the focus away from Google and back to editors and SEOs.

The bigger issue is that the link graph is ruined and Google doesn’t seem to be fixing it.